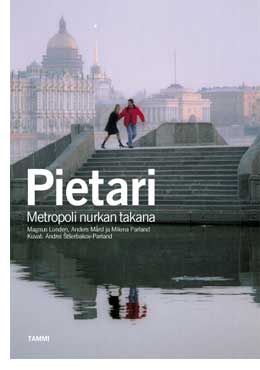 The metropol of Northern Europe

The huge and beautiful city of St Petersburg is just around the corner from Finland. Still, after the war, it's mainly been known as a place where Finnish tourists can stock up on cheap spirits. However, all this is changing now.

That's why my colleagues, journalists Milena Parland, Anders Mård, and I decided to write a sort of insider’s guide to the city.

A couple of years earlier we founded a news agency in Petersburg providing Scandinavian magazines and newspapers with more in-depth stories about life in Petersburg. At the time, people in Finland and Sweden hardly knew anything about the lives of normal people behind the former Iron Curtain.

The book was very well received and was awarded "Travel Book of the Year" in Finland and was nominated for the prestigious Finlandia Award (non-fiction). We never thought people would have been that interested in our special neighbour.

Read a chapter from the book in English.

This chapter is not a piece about normal Russians living their normal lives. No, this is about a visit to the fanciest part of St Petersburg and the most glamorous casino of them all. We went there to challenge the Russian elite in poker. Since I’m an unexceptional player and have never even visited a Casino before, it turned out to be a hell of an experience.
”S:t Petersburg – Metropolen runt hörnet” (St Petersburg – The Metropol Around the Corner), 2003. Publisher: Söderströms Förlag Ab (in Swedish) and Tammi (in Finnish).